Forum rules
This forum is used to post threads about various roleplaying topics. It is also the place for companion threads to ongoing RP and for RP event planning. Well-written guides pertinent to a good portion of the community will be stickied as reference material.

Subtle Godmode -- how do you handle it?

So, most roleplayers have come into contact with the common forms of godmode wherein someone essentially takes control of their character, and forces some kind of conclusion that the RPers whose characters were 'usurped' never wanted. It's not a very hard choice to simply avoid/ignore those players, because EVERYone quickly learns to avoid them.

What is more perplexing are the roleplayers who practice a more subtle form of godmode. I'll call it "roleplay 'blackmail". In this form of godmode, a roleplayer uses situations, settings, or NPCs in a way that would drastically change the way the world works, making it impossible for other characters to rationally be unaware of what happened in that part of the world, or not to become involved, whether their player actually wants to or not.

EXAMPLE: Let's say I have a character who is the Protector of the Patch, and she guards the pumpkin patch inside the City of Stormwind. Any player can wander by, and see pumpkins growing in the patch. While the NPCs don't actively talk about The Patch Protector, they don't do or say anything that directly contradicts the existence of that character.

Now let's say that another player has created a character he calls The Pumpkinator. At some point, the nefarious Pumpkinator declares that he has destroyed the pumpkins in the Patch Protector's patch.

There is nothing in the game to support this scenario. Pumpkins are still growing peacefully in the patch. The NPCs aren't all in a panic. The world has not changed one iota. And yet... he persists in this storyline as though it were reality for all, including my Patch Protector. Possibly, others may decide that they liked that Pumpkin action, and go along with it. In any kind of shared reality, my Patch Protector would KNOW such a thing happened. She'd be forced to either act to stop it, or deal with the aftermath. But at this point -- it's as much make-believe as if I decided that the Patch Protector went insane and killed King Wrynn, and wrested control of Stormwind for herself and her precious pumpkins. Should everyone be forced to play along?

But, let's say I don't WANT to have to deal with The Pumpkinator's evil plans. I wasn't invited to develop the story or had any say in how it played out. Maybe I wasn't even aware of it until long after it had happened. So, what should I do if one day The Pumpkinator comes up to the Patch Protector and says "Ha-HAH! How about all those pumpkins I destroyed in your patch?"

What would you do?
Author Page at the Azeroth Press Wiki -- (still in progress). Also see How to use the AzP Wiki
Top

Work it out OOC.

So, basically there is no longer anything that would be 'godmode' because all universes are equally correct?
Author Page at the Azeroth Press Wiki -- (still in progress). Also see How to use the AzP Wiki
Top 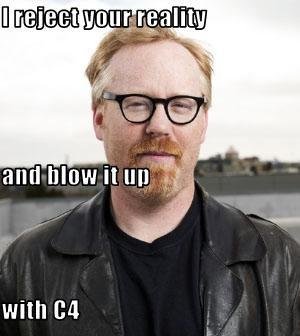 I feel working it out OOC would be the route to go though it largely depends on the individuals involved. I have a tendency to roll with the punches, but this is a new branch of godmodding I am entirely unfamiliar with, so I do not know where my lines are concerning it. It does suck to feel obligated to participate in any RP because getting in on am awesome story line shouldn't feel forced. It should feel exciting and fun, not coercive. Perhaps greater communication between initiator and potentially affected parties is warranted before a first post gets made?
polartech.deviantart.com
Top

This is still a game and you still have ultimate control over your character's life. You aren't forced to accept someone elses reality, even if they thrust it in your face. You can go along with it, sure, because like real life, shit often happens beyond your control. You don't have to though.

If the Pumpkinator said that to me, I'd tell him OOCly that he did no such thing - HE is encroaching on MY RP as he is the initiator. If he persists, I'd /ignore him - I'm not putting up with any more shite than that.

Though it is the initiator's responsibility to coordinate the potential fallout of their actions first, if you see someone encroaching on your RP too harshly, step up and whinge a bit. "This is my RP and I don't want you to enforce this on it."

Pumpkins are still growing peacefully in the patch. The NPCs aren't all in a panic. The world has not changed one iota. And yet... he persists in this storyline as though it were reality for all, including my Patch Protector

If you see this static representation as truth, then why would you want to RP as a protector of something that cannot be destroyed? What's the point?

There is also a baker who walks the streets of Stormwind hawking bread. 24/7, non-stop. Should we, as rp'rs, conclude that this is canon? That her bread never spoils, that she needs no sleep and is constantly fresh as a daisy? If we accept static representations as truth, without room for creative device, we should just all give up right now.

You say the Pumpkinator has taken on the subtle Godmode persona by destroying the pumpkin patch that you set yourself up to protect, effectively blackmailing you into roleplay action (or non action).

Might I counter with the fact that setting your character into a position of power over the NPC pumpkins, thereby forcing the Pumpkinator into dealing with the Patch Protector, does the exact same thing? By protecting something that needs no protection, you have effectively taken away the Pumpkinator's RP reason for existing.

The Pumpkinator lives to destroy pumpkins. It's his reason for being. Yet, as you pointed out, they cannot be destroyed in game. They are background features; static representations designed to add colour and detail to a world we choose to play in. Therefore, said villain has a choice: quit, since he clearly cannot smash the pumpkins. Or roleplay that he did it, which is what we do here, I think.

Now, the Patch Protector has no reason to exist either. Her pumpkins cannot be destroyed, and therefore need no protection. Nothing in game supports this scenario, not even the NPC's who wander around. Yet, there she sits, watching over that which cannot be harmed.

Neither, it's all roleplay.

So, we have two different perspectives now, all from a RP point of view, since clearly there is nothing in game to support either position.

The Patch Protector has set herself up in a position of power over the NPC pumpkin patch, insuring that her little orange balls of fun are safe from villainy, or whatever she's protecting them from. Rain, maybe.

The Pumpkinator has no such power. If he wants to do what makes him tick: smashing pumpkins, he has to get past the Patch Protector, who determines what truly happens to the NPC pumpkins by her response to the Pumpkinator; including no response at all.

Now, he has a few choices here. 1) he simply announces that he has destroyed the pumpkins. 2) he plots and plans, giving the Patch Protector ample opportunity to participate. It is her self-proclaimed pumpkins, after all. 3) Give up on life and change his RP, as all that he lives for is smashing bloody pumpkins.

Option 1 is Godmode Pumpkinator. Option 3 is Godmode Patch Protector (she forced another player to change their rp)

Option 2 is Roleplay, with the outcome determined by the players through action/reaction, and cause & effect.

Ultimately, you have the choice whether to participate or not - each leading toward an outcome for the Pumpkinator. However, by choosing to control the static, un-killable, Blizzard-created pumpkins, the Patch Protector walks the line of godmode by deciding whether or not other players can interact with said pumpkins.

The elephant in the RP room. I've been on both sides of the argument, and need to chew on this a little while.
Top

Thomas Jarington wrote:Ultimately, you have the choice whether to participate or not - each leading toward an outcome for the Pumpkinator. However, by choosing to control the static, un-killable, Blizzard-created pumpkins, the Patch Protector walks the line of godmode by deciding whether or not other players can interact with said pumpkins.

The thing is, the point of the subtle godmode is to force other people to interact with the godmoder. If you look at the example Legion gave, at no point did the Pumpkinator talk to the Protector before hand. There's no attempt at cooperation. It's just "Hey, I'm fucking with your RP!"

In my experience, these situations aren't even so much about RP, as about personal grudges, or wanting attention or power-tripping. To the SubGod, it doesn't matter that there were personality clashes (OOC and/or IC) , or differing desired outcomes, or plans already set in motion for a character/characters, or simply lack of a character that could/would be interested or able/ willing to respond. The other players aren't participants. They're props.

I've run into this in fan clubs before. In one in particular, it was especially difficult to deal with because while its administration was presented as "everyone gets a fair shot to make plots/get heard" in actuality we were all supposed to just go along with what the founder of the club wanted. (Even if it directly contradicted what had been established by other people -- and with the founder's approval -- years before.)

We don't have that issue here, at least. There's no one person in charge of what folks can come up with. However, on the flip side of that, is pure social democracy in action -- do other players want to go along with what either the Protector or the Pumpkinator have decided to do?

For myself, at this point, unless there's some overture made toward cooperation, the SubGod gets ignored. What was purported to have happened, simply didn't, as far as My Gang is concerned.
Top

Assuming there was no ill intent, just an unfortunate clash of storylines, the only thing you can do is kind of squint and soft-focus the whole thing. "Oh, must be some other pumpkin patch." Take advantage of the fact that there is no ultimate authority on the matter, shrug, and don't dwell on it in character. Treat it like a plot hole to be ignored.

But as others have said, it's a big roleplay collaboration opportunity as well. It will require a willingness to compromise, i.e. someone's going to have their character falter. But that can be an excellent chance for real development and an interesting story.

However, if it is someone just trolling you IC... /ignore. As Kiraleen said, Your Gang can continue doing your own thing.

Users browsing this forum: No registered users and 18 guests